We love Kamloops and all it has to offer but there are times that we are amazed by a wonderful sight and today was one of those days ! We’d been on a drive through the Tranquille Valley on July 1 and had only seen one deer, and he was not into posing for pictures.

When we least expected to see anything, our young grandson spotted something! The hillside was covered with California Bighorn Sheep (now called Sierra Nevada Bighorn sheep) ! It looked like the hill was moving as their color allows them to blend in so well with the groundcover. We quietly watched them climb the hill, stop to graze and wander about, oblivious to us at the bottom of the hill, with me madly taking pictures. 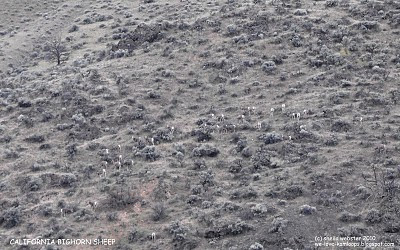 A closer look at the Bighorn sheep
When you look closely at the hill, as shown in this picture, you will see all those white legs and back sides that identify the sheep there, otherwise they are hard to see.  There are some juveniles in the group as the lambs are born in May but it is very hard to tell from this distance. They grow very quickly and usually weigh about 29 lbs(13 kg) by the end of the summer and are completely weened by 6-8 months. 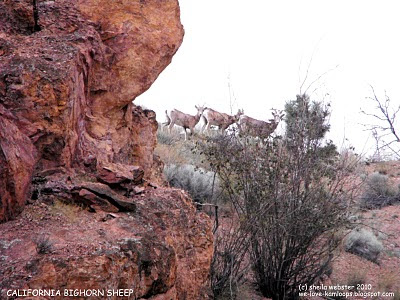 Curious sheep watching us
The sheep made their way over to a rocky ravine, which had some gorgous colored stones to brighten up the pictures and I was able to zoom in for better pictures.  We didn’t count sheep, they were spread all over the hill and constantly moving but apparently there are 3100 sheep in our area and we think we may have seen about 100 of them. This was a large herd of healthy looking sheep. 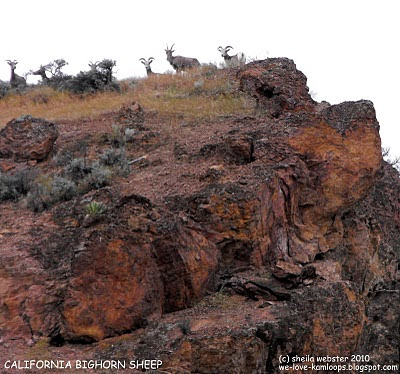 The view was great
The rams (males) have horns that can weigh up to 14 kg (30 lbs) and the ram can weigh up to 90 kg (200 lbs). The large curl of their horn, which they never shed, allows biologists to tell the age of a ram. 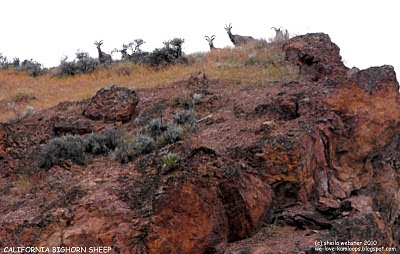 These Bighorn sheep are not used to seeing spectators
The females, called ewes can weigh up to 60 kg (140 lbs). They have a small curve to their short horn, which also makes it easy to tell the difference between males and females when we see them. Juveniles start growing their horns early.

They're starting to lose interest in us
Because of the healthy large herds in our area, some sheep have been captured and relocated to other areas such as Nevada, Washington, North Dakota and Utah. The most recent capture was done in Kamloops in January 2009 and 15 sheep were transported 200 km (120 mi) to the Okanagan Mountain Provincial Park. 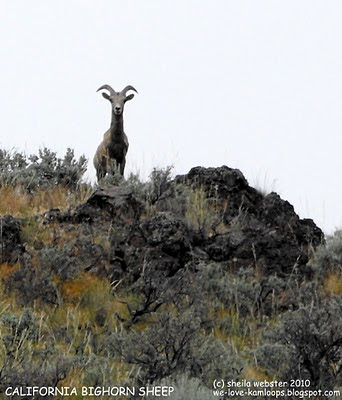 One last look at us
In the early 1900's the US government declared the unique subspecies of California Bighorn Sheep to be endangered. Thanks to a big campaign mounted in 1936 by the Arizona Boy Scouts there is a population estimated to be 25,000 Sierra Nevada Bighorn Sheep.  The US still has the California Bighorn Sheep listed as a 'federally endangered species' due to population declines but many steps towards recovery are being taken.
Thanks to the Wild Sheep Society these captures and moves were done successfully and without injury to any of the sheep. They have detailed their capture and you are able to read how they do it by clicking on ‘Wild Sheep Society’.

We love seeing the Kamloops wildlife and we are so lucky to have them in our neighborhood, there is no place like home !
Posted by Sheila and Keith at 6:00 AM