We love Kamloops for all that it has to offer and that includes the visitors that we get. We were enjoying a nearby park recently and I was surprised to find one of those visitors, who flew up into a tree while I was looking at the flowers ! I did not know what he was, but was taking lots of pictures and now I was on a mission to find out. The first thing I had to do was get my pictures onto my computer to get a better look at him. The next thing I would do is put the binoculars in the car for future surprise visitors ! 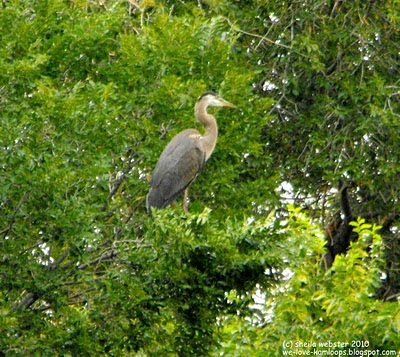 Visiting heron on McArthur Island
What I had taken a picture of was a visiting heron. He wasn’t exactly the color that I was familiar with but then, I hadn’t seen herons in Kamloops before. There are more than one kind and this one appears to be a different color from the Great Blue Heron (clik here to read more) that we had seen on our RV adventures. 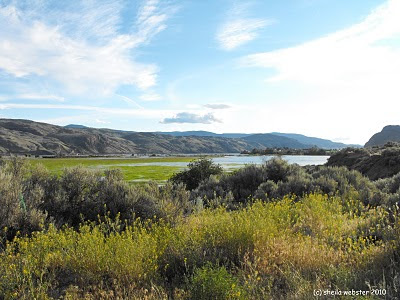 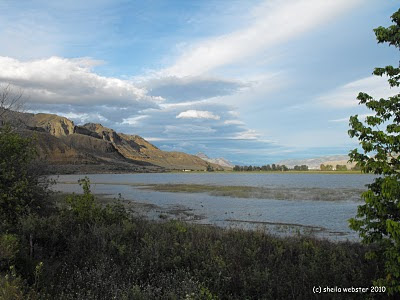 Tranquille WMA with high water
This area 18 km (10 mi) west of Kamloops where the Thompson River enters Kamloops Lake, is typically flooded from mid May to mid July due to the spring runoff into the Thompson River and is part of the Lac du Bois Grasslands Protected area. 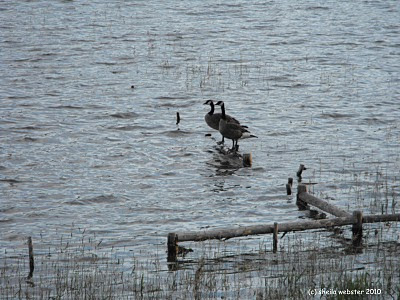 Canada Geese sit on fencepost
The Canada Geese were using fence posts to perch on due to the high water in July.  They are regular visitors, if not residents at many places in Kamloops. Typical fowl found in the wetlands aside from the Canada Geese are swans, mallards, Goldeneye and Wood Ducks. 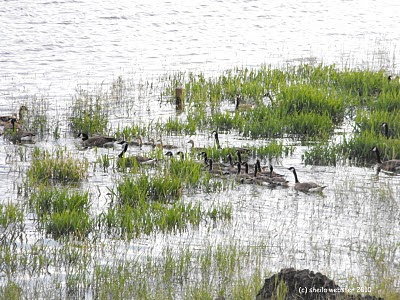 Canada Geese and goslings in July
With the water so high, it came close to the roadside. I was able to see the Canada Geese and their young as they swam over the fence ! The best birdwatching time at the Tranquille WMA is March, April, May, Sept, Oct., and November but it looks like we have visitors during summer months, too. Tranquille WMA with low water in August
Now that we knew the park visitor was a heron, we were on our way out to see the Tranquille Wildlife Management area again as my search for answers had said that there were visiting herons out there. Now we know where the visiting heron was likely headed to, he had just missed his target by 18 km (10 mi) ! 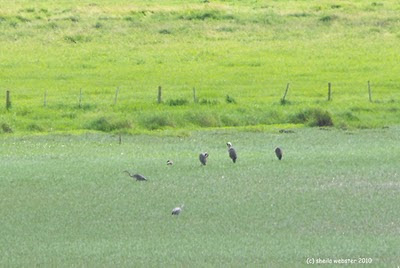 A flock of heron at Tranquille WMA
We found the rest of his flock, hopefully he did, too. The article (clik to read that article) I found said that there were Great Blue Herons out there, and this was written by Rob Butler, so I will believe they were gray herons. The same article said there were other visitors out there, too and this I had to see with my own
eyes ! 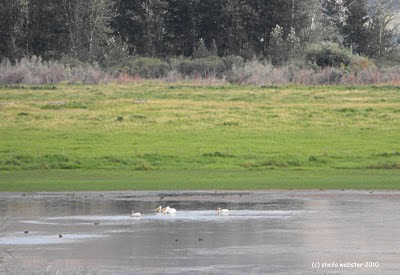 Pelicans at Tranquille WMA
These wetlands are resting areas for spring and fall migration but nothing would have made me expect these visitors in the middle of our summer months, let alone these ones. There were four large white pelicans swimming around the pond.

Visiting Pelicans in Kamloops, BC, Canada
It isn’t possible to get close to the pond so it was difficult to get pictures of the pelicans. They were busy diving for food and were swimming very quickly but I did manage to get some proof that they were really visiting Kamloops on this August afternoon. The only other time we’d seen white pelicans was on our visit to Texas during our RV adventure.
We know that Kamloops is the chosen destination for many visitors but these ones are here without many people knowing it, and I am glad to be one that does.

This tells another reason why we love Kamloops ~ there is just no place like home.

Posted by Sheila and Keith at 1:44 PM