Communities in Bloom ~ Kamloops, BC ~ Canada

“People, plants and pride……. growing together” is the slogan for Communities in Bloom and that is what has been happening in our community for the past few years.  The community is about to be judged July 30 & 31, 2012 and the committee has been a very active group making things happen to make us all look better!
﻿
﻿Take a handsome like the Old Courthouse and put some pretty flowers in a very artistically designed garden and you have a beautiful sight at the corner of First Avenue and Seymour Street.  The Old Courthouse has never looked so good.
﻿ has been winning awards nationally and internationally and plan to do so again.  This involves the community at large but is spearheaded by a community based team from the arts & culture, recreation & tourism, business sector and local media.
﻿The participation involves anyone who wishes to make their neighborhood look better with the help of flowers and we will see examples of this all over the South and North shore, it is wonderful to see the participation from all aspects of the community, business and residential.
﻿The Communities in Bloom committee hold several seasonal celebrations and the planter competition is just one of those.  There are planters scattered all over the downtown core that were part of the competition and painted and planted by many with one idea in mind and that was to win their competition, which brings out the artist in several city dignitaries, too. ﻿
The committee acts as an advisory to the mayor and council as well as the Parks & Rec plus the cultural department for the City of .  Between them all, they put their talents to work and win trophies.  ﻿﻿
﻿﻿ on Lorne Street has always been a great place to spend a summer day with all that it has to offer and the Rose Garden adds a special space to sit and enjoy the beautiful setting, often used for special occasions like weddings and photo sessions. ﻿﻿
﻿﻿We have Marigold Miles on the North and South shore and the committee has had the help of elementary school kids to plant the marigolds in the spring.  It makes a pretty boulevard down
West Columbia Street as well as in front of the North Shore Fire Hall on Tranquille Road.
The Wilson Street house has some front yard gardens to enjoy as you begin the trip down
Tranquille Road on the North Shore after crossing the Blue bridge over the Thompson River.
There are several planters along Tranquille that were also part of the planter painting competition and fun to see.
﻿
﻿The in on the is a jewel in the park.  It borders along the slough where we can also watch the birds and ducks as they enjoy the quiet part of the river.
﻿
﻿Kamloops has a semi-arid climate so what better example to show this is the xeriscape garden in McArthur Park. This garden shows many examples of those plants and flowers that will thrive and survive in the wonderful summer months we are usually able to enjoy in Kamloops.
Everyone involved should be very proud and happy with the work that has been done in our community. Those that are not involved appreciate what you’ve done and are cheering from the roadside as the judges make their way around our city to see what you have achieved. We have no doubt they will be giving Kamloops another award. Good job, well done!

For those that would like be become involved or learn more about the Communities in Bloom, click here to see this information.


There is just no place like home.
Posted by Sheila and Keith at 2:13 PM No comments:

Email ThisBlogThis!Share to TwitterShare to FacebookShare to Pinterest
Labels: Communities in Bloom, Kamloops BC

﻿﻿Canada Day celebrations in Riverside Park made it a great day for thousands of people.  The city offered free bus service for the day so there was no parking or traffic problems to deal with. There was also a free shuttle offered from the Lansdowne Market transit exchange to Riverside Park.
﻿﻿The Folkfest and Art in the Park had people coming in droves to see the sights, the entertainment and the art as well as to try the food from the multicultural booths that were set up throughout the park.﻿ 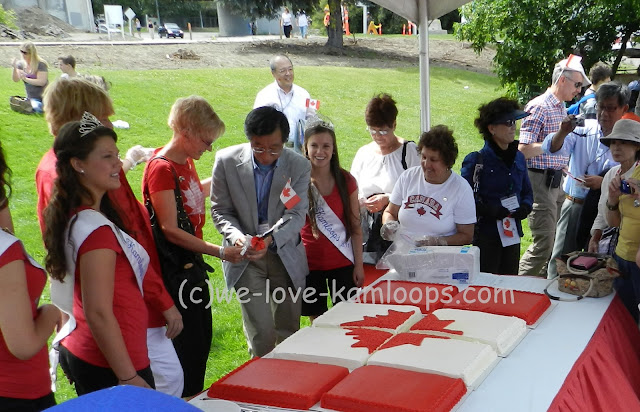 Cake cutting ceremony for Canada Day in Kamloops, BC
Councillor Tina Lange helps to cut the cake as the Miss Kamloops royalty looks on.  The cake cutting is always a favorite with line-ups starting early for the free piece of cake they would be given.  The cake looked great but I wasn’t joining into that line.﻿
There were some very talented artists there with their artwork on display and for sale.  The booths were set up all over the park and ISC entrance, overall displaying an exciting variety.  What a great place to show the talented artists has.
﻿
﻿One very talented artist is Carly Schmidt and she was busy working on one of her painting.  She had several examples of her talent hanging for us to see.  Click here to see more of her work on her webpage.
Another talented lady is Sheila who works magic with feathers and hats!  This hat was beautiful, as were her others on display, check out her webpage for more info.﻿
﻿
﻿These appeared to be a popular part of the activities, I suspect the line-ups were a constant for the children’s activities that were on hand.  The big inflatables included a spaceship and a pirate ship.﻿
﻿There was the Pirate magician and several actors dressed in costumes and wandering the park entertaining the kids and offering photo opportunities for the tourists who were also there enjoying the Canada Day celebrations.﻿
The festivities began with the pancake breakfast at 7am and were ongoing throughout the day ending with fireworks at 10:30pm. Thousands of us enjoyed the day and it was great to see a big turnout spending the day in the sunshine having a fun time with their families and friends.
Thanks to all who worked hard to make this special day a success, including the City of Kamloops workers who installed the gabion wall of sand to make sure the river didn’t interfere with the celebrations in Riverside Park. Well done!

Check here for more information about Canada Day and the National Flag of Canada.

Posted by Sheila and Keith at 5:20 PM No comments:

Donkey Days Celebration!  My interest was piqued when I saw an ad in the paper showing there would be an open house held at a donkey refuge.  I had read an article a few months ago and was curious about the refuge but this offered an invitation to come out and see the Turtle Valley Donkey Refuge.  Sounds like fun to me.
﻿The Turtle Valley Donkey Refuge owners, Rob and Shirley have been rescuing donkeys from all over B.C. since 1999 but it is only in the last 3 years that they have been open to the public. They now have 29 donkeys live here on the 80 acres and the herd is growing as the accommodations allow.﻿﻿
﻿﻿The rescue donkey may come from a neglectful or abusive situation or may be submitted by an owner when they can no longer care for them, but most of them have health or other problems. The veterinarians will check them and put them on the right program to heal. Several have had to have dental care, which is done by a local vet who specializes in equine dental care.  The farrier will tend to the needs of proper care of their feet and hooves, some donkeys have arrived having difficulty walking, due to poor foot care.﻿﻿
﻿﻿It is difficult to look at some of the photos that show what the donkeys looked like when they arrived but it must be very rewarding for those involved to see them after they’ve received lots of love and attention.  Many donkeys arrive with issues of trust of humans after being abused and it takes a long time but with kindness and good care, and they have plenty of that here at Turtle Valley Donkey Refuge, they do heal.
﻿﻿There were bands playing (we heard some great music), face painting as well as farrier and blacksmith demos, also informational lectures from the veterinarians that care for the donkeys.  Volunteers with an imagination made some ‘donkey muffins’ that added to the fun and was part of the fundraising.﻿﻿
﻿﻿The rainy weekend did not put a damper on the festivities of the Open House. We saw many coming to have a look at the donkeys and where they live and enjoying the many demonstrations and sights to see at this celebration.  There are people involved in several ways of being part of the fundraiser for the day, including Rita. ﻿﻿
﻿﻿Tiny Tim is not very old, I believe, but he appears to be pretty cranky and not too sociable here.  The other donkeys prefer to stay clear of him and definitely did not want to come into the barn when he was there.  It was a struggle but Timmy stepped up to the challenge and did come in to see the kids.﻿﻿
﻿﻿Timmy, a mini Mediterranean donkey, is 28 years old and 34” tall and loves children.  He showed off his teeth to some little ones and enjoyed all the attention he received.  He is a very protective donkey, too, he once caught and killed a coyote who was threatening the herd.﻿﻿﻿
﻿﻿﻿George is 6 years old and has a loud and squeaky bray, which may be the reason he is called boisterous, but he was quiet during our visit to the barn and he’s considered to be a kind donkey.  He arrived with an abscess that causes him severe pain that may take months or years to heal, in the meantime he must remain here at the barn.﻿﻿
Had someone asked me what animal I would call ‘adorable’ or ‘cuddly’, I would instantly say a kitten or puppy but I think I have to add a donkey to that list!  It was amazing to see how they like to hug and cuddle with people.  Jose soon became my buddy after a few scratches behind the ears and wasn’t willing to give that up too soon.
﻿
﻿There is a story for every donkey that lives in the Refuge and some of them are very sad. A quote from the owner is “Donkeys give gentle love to their owners and are easily vulnerable to abuse.” That is heartbreaking to hear, but wonderful to know there is this refuge they can come to.
The wonderful atmosphere at the Turtle Valley Donkey Refuge shows all the love they’re given from the staff and volunteers and how happy the donkeys become once they’ve been rehabilitated here.
The barns, pens and surroundings were immaculately clean and very impressive, a result of hard work and the dedication of many. The donkeys looked great in their Sunday best when we were there and were wearing a name band around their neck for us to identify them.
We can only hope that the Open House and fundraiser will help keep these donkeys and those to come, safe from harm and happy.
There are several ways to help the Turtle Valley Donkey Refuge, whether by volunteering or contributions to sponsor one of the special donkeys so click here and learn more. They’re open to the public for summer hours on Wednesday, Saturday and Sunday from 11:00am to 4:00pm.

It's a great place to spend some time and the donkeys love your visits.

There is just no place like home and this is home to these donkeys.

Posted by Sheila and Keith at 4:00 AM No comments: