These Hoodoos that line the South Thompson are an interesting way of being reminded that they’ve evolved over thousands of years yet are still standing, big and strong.  They are most common in dry places and being we are semi-arid hoodoos are seen in several places around Kamloops.

It has been many years since this fencing was put here and is amazing how it still stands against time.  The construction is rustic but it did what it needed to do.  Cattle would be brought down from the range and closed into the corral then would walk through this narrow walkway to the waiting truck.

The hills are now green and there are some trees in blossom stages so although we are well into Spring time, we are just now getting some signs that it has arrived.  I’ve been anxious to come out on a nice sunny day to get some encouraging photos that spring really has arrived.  Still not quite there, IMHO.


The South Thompson River comes down from Shuswap Lake and is now waiting for the spring runoff to fill it to the brim.  These sandbars cover a lot of ground when the river is at a winter low but before long this river will be running at a much higher level that we’d want before it settles down to summer levels.

This makes for a nice little cove but that island down there will be under water within days.  With the temperature warming up, the snow in high levels is melting and will be adding to the river levels.  The sunshine didn’t last long today but on a nice sunny day, this looks like it could be a nice place to visit while cruising up the river in a boat.

We’d notice this beautiful buckskin horse up ahead behind a fence.  Once we got there, there was a clearance in the trees at the fence and we saw three of them so I had to get out and get closer for a visit.  The buckskin came first and reached out for a pat and the other two joined him.  I was so happy to get some pets with them that I was a bit distracted for picture taking.  Within a few moments, they were on their way, running towards a whistle, or so it seemed.  Trees in the way for photos then.


We hadn’t driven far from the horse visit when we saw two chickens coming down the road towards us!  This is a country road, not a lot of traffic but still a bit dangerous for them and not something we’d expect to see.  I got out of the truck and once they saw me, they came running towards me!  That’s a first! LOL.  I had to get photos but a video would have been better.  I shuttled them back across the road to let some cars go by and a third chicken joined us.  It appeared that no one was home at the main house but the chicken house was full of chickens who were now following me on their side of the fence.  I was able to calmly send the 3 escaped chickens up the bank towards their home before getting back in the truck.  I think they were out shopping for food, it was lunch time for them.

A country road drive would not be right without seeing some deer.  There were seven of them quite a ways off the road in a big field enjoying it all to themselves.  Deer are not looking for pats or food so they weren’t wanting to see me come any closer than the road.  There were no fawns in sight.             The llama were quite a ways off the road, too, and although they showed a bit of curiosity while they watched me taking their picture, they made no effort to come for a visit.  They were maintaining social distancing, as we are having to do during this pandemic.  Clever llamas.

Lunch was served buffet style and the cattle were not practicing social distancing, they had ‘missed the memo’.  All things seem to be normal for these ones, so we aren’t complaining to anyone!  Just enjoying the day and the many sights it offers.

The country road drive has come to an end and we cross over the Pritchard Bridge to get onto the highway to go back home.  This bridge was built in the early 1900 and spans the South Thompson River.  It is a one lane bridge, although a bit wider and higher in the center to allow boats to go under.

Our Sunday drive offered some sunshine, some great Kamloops hoodoos, farm animals and plenty of calm.  Those chickens strutting down the road was the chuckle of our day!

Times can be made to enjoy and we must make the most of what we have.

The snow began as tiny dry floating flakes about 7:30am this morning.  Rain/snow had been forecast for the area but that would normally mean snow on much higher elevations.  I think the weatherman may be surprised by this snow, too. 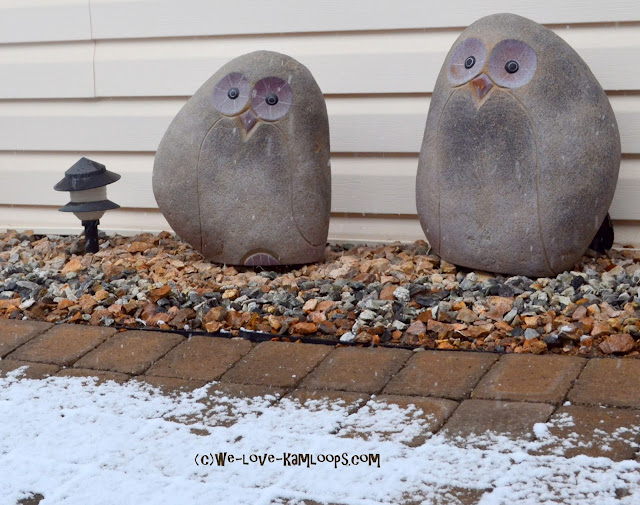 Whootie and Blowfish are inside all winter and come out once the weather improves.  The look on their faces shows that it may have been too early!  Whootie calls out, “whoo whoooo’s idea was this?”

The wind has also been blowing so the snow is also on the covered deck!  Most of the cushions were removed when this all began, some just have to ride it out!  This is a great lunchtime spot when the weather is nice……which is not in the forseeable future…. We are waiting!! 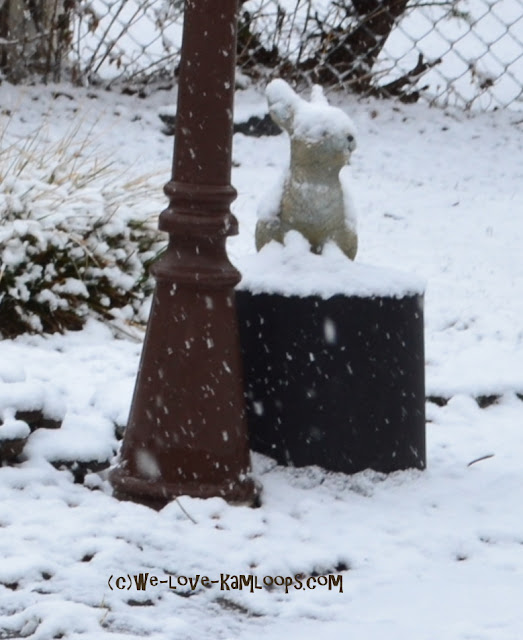 Bunny
Bunny has been waiting for Easter to arrive to hide some eggs for us.  Not only do we have to delay our egg hunt due to isolation times, but poor Bunny needs to go back into hiding.  “I ‘bun’ waiting for the eggs!”, cries Bunny.

During nicer weather, Wren normally nests in the wishing well but due to unforseen circumstances, she didn’t get the nest made and now poor thing sits frozen to the ground!  She’s calling out “wren is this going to end?”.  Sigh………. wish I could tell her.

The pond pump is still working so has kept the water without ice for those in need of drinks.  We often get visiting birds but today seems to have no traffic at all.  The bistro set is ready for morning coffee visits, the old bike has pots waiting for spring flowers and the bench is waiting for passersby but on this April day it looks like we may have missed a couple of 2020 seasons, spring and summer may never come.

Ichabod and his wife Shirley hang out here all summer.  I sure hope I got her name right, she is very shy as you can see, so she won’t confirm her name.  I find it safe to just call her Mrs. Crane.  I think she prefers that anyway.  Ichabod is looking skyward trying to decide if they should take flight.  I heard him whisper to her “surely, we don’t have to live like this” or was it “Shirley, we don’t have to live like this”?


So then I come back inside and what do I see but Penn and Gwen standing at the door waiting to get out!  They’ve seen Maggie do this a zillion times and it works for her, the door opens.  Penn and Gwen are looking for their friends, the ‘penquins’.  They don’t realize there are no others in the neighborhood, in spite of this weather and I sure don't want to be the one to tell them, it would break their hearts.

Poor Sully was pretty upset that he was forgotten on the first publication of our yard family.  He's been Sull-king for days so I thought best to fix that problem and eliminate family squabbles.

As you can tell, Keith and I have done well during our self-quarantine time……. normal people……….all alone…… still sane and healthy!  LOL  Do not worry about us, everyone out there is in self-isolation, too, which we begin tomorrow.  So much more freedom…not….. but at least we know we won't go craaaazy if we can go out.  Too late??  LOL

On a serious note, if we maintain the isolation time, we will all be back to norm soon, we sure hope!

Stay healthy, well and safe everyone!  Keep your distance from the CoVid-19,

Posted by Sheila and Keith at 12:29 PM No comments: